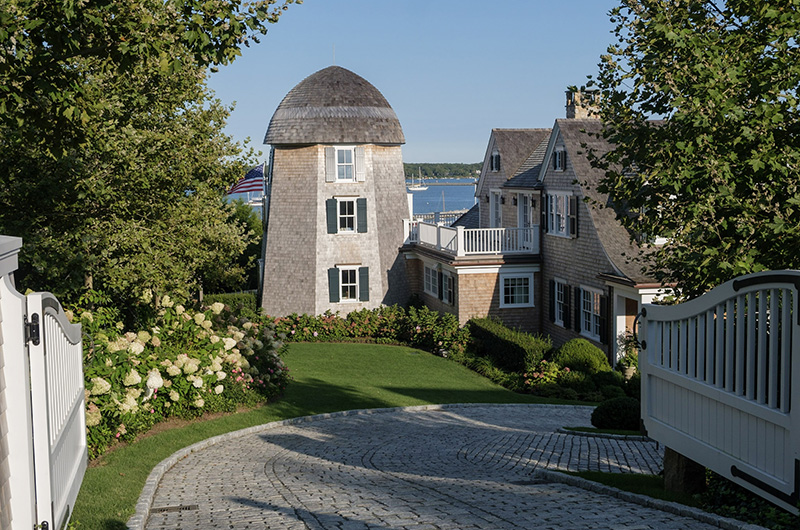 Between Owen Park and West Chop Cemetery, Vineyard Haven’s main street was once the seasonal home of four internationally acclaimed writers and a renowned journalist.

Summer neighbors Art Buchwald, Lillian Hellman, John Hersey, William Styron and Mike Wallace all lived on the harbor side of the street during the second half of the 20th century. Four of the five decide to stay in the small 1791 cemetery, also on the east side of Main Street.

“The harbor and the boats somehow unite all these writers,” said amateur historian Wayne Nichols, who led a walking tour of the neighborhood Saturday afternoon for the Vineyard Haven Public Library.

More than 15 people gathered at the bandstand in Owen Park to start the tour with Mr Nichols, who also leads walking tours of St. Croix, US Virgin Islands, in character as Alexander Hamilton.

In the early 1980s, Mr Nichols told the group, he was living on the island and got a summer job as a driver for Ms Hellman.

The tour stopped at several places, including the local cemetery where most writers are buried. — Mark Alan Lovewell

“She loved to fish. That’s how I met her,” he said, recalling his first meeting with the famous playwright and author who, despite several blows, continued to sail on his fishing boat Julia.

Recruited by Julia’s skipper Jack Koontz – a longtime former fishing columnist for the Gazette – to one day help lift Ms Hellman between the ship and the dock, Mr Nichols said he got on well with the author and had ended up with a job carrying her high-profile diners.

“She was known as one of the greatest hostesses,” Mr Nichols said, adding that he was sometimes invited to join the party if Ms Hellman wanted her guests to stay a little longer.

Ms Hellman’s former summer residence, Mill House, was demolished and rebuilt not too long ago, Mr Nichols said as the tour group stood in the driveway overlooking the property to the brightly colored shingles.

Mr. Hersey’s Italianate villa, Hedge Lee, still stands above the harbour. Built in the 1920s, the red-tile-roofed house became the Hersey family’s summer home in the 1960s. During the off-season, they shared a resort with author Ralph Ellison in Key West, said Mr. Nicholas.

Pulitzer Prize-winning A Bell for Adano novelist Mr. Hersey also reported on and wrote about Hiroshima in the aftermath of the US nuclear bombing of Japan. He is also the author of Blues, a series of essays inspired by fishing in the waters of the vineyard. Mr. Hersey died in Key West in 1993 and became the first of four authors buried in West Chop Cemetery.

In Mr. Buchwald’s shaded former home, across from the library, a semicircle of white Adirondack chairs sat empty on the wide green lawn as if waiting for the comedian and his neighbors, especially Mr. Styron and Mr. Wallace, resume one of their summer conversations.

These three men had more in common than their minds, their Pulitzers and the Vineyard. They were all suffering from depression, Mr Nichols said. Mr. Styron wrote one of his most famous books, Darkness Visible, about affliction.

Mr Styron went the first of three, at the end of 2006 at age 81. His headstone is inscribed with stars and a crescent moon above the waves and the words, from Darkness Visible, “And so we went out, and once more saw the stars.”

Mr. Buchwald followed in early 2007, also at age 81, after entering hospice more than once and writing an unexpected final book, Too Soon to Say Goodbye. Its stone bears the image of a manual typewriter with inserted paper, ready for the author’s ideas.

Mr Wallace lived to be 93 and died in 2012. His stone, like Mr Hersey’s, simply states his name and dates.

According to a tradition also observed in other cemeteries on the Island, small pebbles had been left on the arched top of each writer’s stone in tribute to the memory of the author.

Ms Hellman died in 1984 and is buried in Abel’s Hill Cemetery in Chilmark.

“There’s always an exception with Lillian Hellman,” Mr. Nichols said with a smile.

Hundreds of people gather at Angels’ Circle to commemorate the victims of 9/11,…