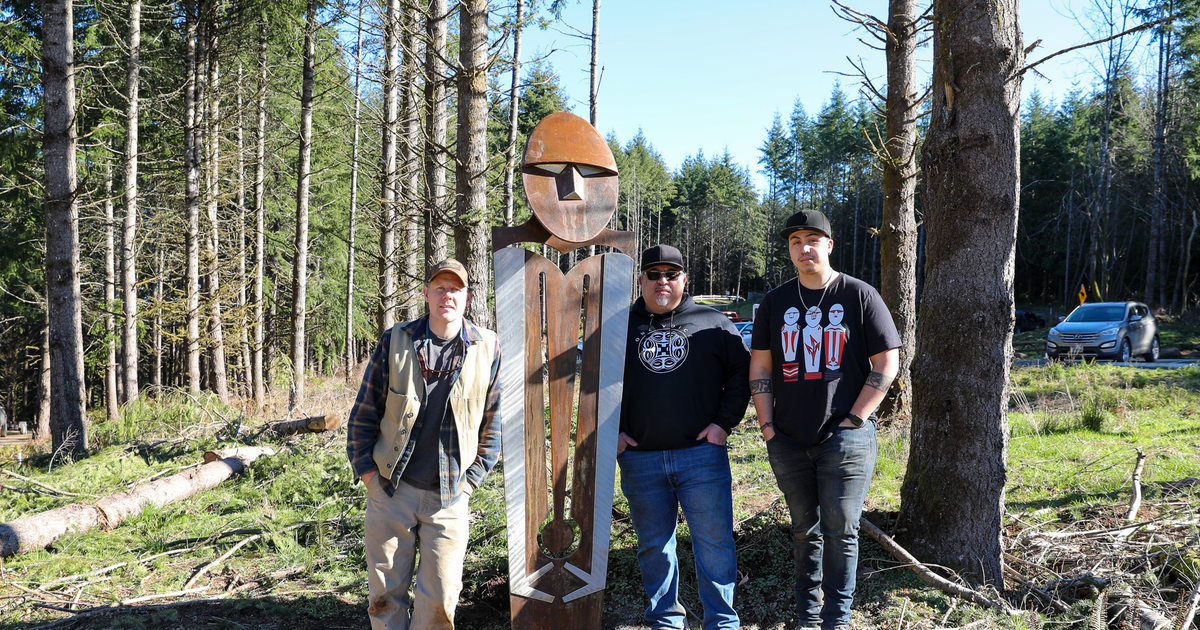 The Story of Three Elders at Chehalem Ridge

Upon entering the Chehalem Ridge Nature Park trail system, visitors are greeted by a tall, slender figure carved out of metal. Her silver arms extend to the edges of her body, ending in open hands – a gesture to welcome all visitors to the site.

She is part of the Three Elders, a series of statues created and installed in partnership with members of the Confederated Tribes of Grand Ronde (CTGR).

Each time Metro creates a new park, a certain amount of construction funding is set aside for site-specific artwork. In the case of Chehalem Ridge, an advisory committee decided to work in partnership with the CTGR to draft the call for artists and select an artist.

“It’s the territory ceded to our tribe,” explained Bobby Mercier, who served as both cultural advisor and lead artist on the project. “And so, it’s rather fitting that tribal members can put our art back in our place, especially at the top of our own villages.”

Mercier’s artistic team chose the theme of the Three Elders to tell the story of people’s connection to the land. The stylized forms are minimalist, although each has a collarbone, breastbone and navel – signified by a round circle that represents a connection to mothers and other ancestors.

“It’s not him or her,” he said. “When we say they’re figures of power, it’s more that they’re watching over a place.”

Each figure wears the same expressionless face and slanted forehead.

“Traditionally, you would see a lot of our alumni who come from high-ranking people – their heads would be flattened,” Mercier said. “We put that into our art form to recognize our ancestry, the ranks we come from.”

In addition to recognizing past generations, the project helped empower future generations: Mercier’s son, Nakoa, was able to participate in an apprenticeship program that Metro piloted during the project. The apprenticeship gives people the opportunity to learn the process of working with government employees to create art for the region.

“I’m very grateful that my son was able to be a part of this,” Mercier said during the park’s ribbon-cutting ceremony. “When you can bring in young people and have them experience that and how do you work with [Metro] and how to work with other companies, and see all the different stages that they have to go through, so that one day when they’re artists in their own right and they’re doing things, they have it all in their active is a good thing [thing].”

“Each of us decided to take one [figure] and put our little twist on one of the traditional stories that comes from this region, from our Tualatin and Kalapuya people,” Mercier said.

The second figure is standing along the Ammefu Trail – a short detour from Timber Road. It displays three large wapato (arrowhead) leaves on its chest. The leaves recognize the Wapato people in the area and represent the story of the creation of Lake Wapato and how it was dammed by the frog people.

The third figure watches over the highest point in the park, the Mampaɬ trail lookout, which offers a view of the ancient village of Tualatin Kalapuya. The statue is lined with dentalium, tusk shells that served as the earliest known currency of indigenous peoples. This piece continues the traditional story of how Coyote tricked the frogs into letting him drink from their lake by paying them with fake dentalium that he carved out of deer bone. Coyote then broke the dam to release the water for everyone to drink, creating rivers and streams that still feed the area today.

The live series “King Kong” is in preparation at Disney +