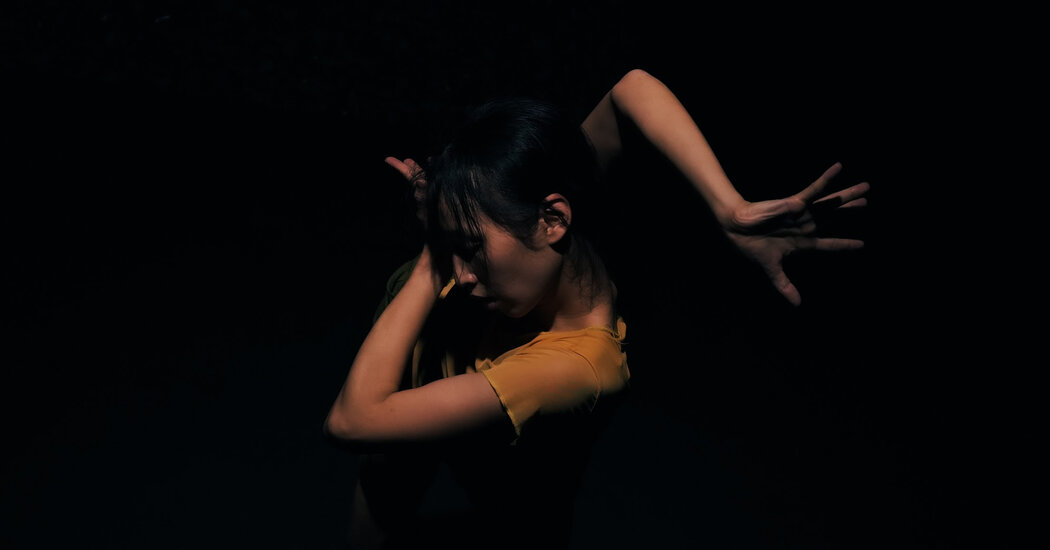 The Japan Society Contemporary Dance Festival, an annual event that samples recent work from several East Asian countries, skipped last year, with the assumption that by 2022 everything would be back to normal. the normal. Never mind.

Even though the latest virus variant and outbreak has forced more cancellations and postponements in New York theaters, the show at the company’s home in Midtown went ahead this weekend, almost as planned, with four North American premieres, reduced audience capacity and extra-strict restrictions. mask rules (N95 or KN95 required). The vicissitudes of the pandemic forced a group from Japan to appear via video, which helped make the program not just a welcome window into distant scenes, but another demonstration of the differences between live and filmed dance.

The preshow was wonderfully live. As part of Taiwanese choreographer Wei-Chia Su’s FreeSteps project, the exceptionally agile dancer NiNi (also known as Yu-Ting Fang) performed on a stage island in the hall of the Japan Society. Twisting her body to the brink of contortion, she sensually spiraled. Pausing now and again to stretch skyward before falling back into her floating furrow, she looked like someone who was continually embracing and escaping. It was dance as moving sculpture, a three-dimensional study best enjoyed in person.

By contrast, the first theatrical selection was flat — and not just because it was on screen. “A Hum San Sui”, by Kentaro Kujirai and Barabbas Okuyama, the Japanese choreographers and performers, seemed underserved by the cinema. The close-ups amplified the aggressive quality of these Butoh performers; the framing exacerbated the aimlessness of their mutual encirclement. At least in one endearing coda, the performers poked fun at themselves.

“Complement,” by the Korean duo of Minsun Choi and Jinan Kang, was partly about the discrepancy between recorded performance and live performance. Throughout the play, video director Taegyeong Kim was on stage with a camera, filming the dance, sometimes connecting her equipment to laptops hooked up to two flat screens. But the footage of Choi and Kang on those screens was not a live recording. Their movements on screen differed from what the dancers did on stage: a slyly exaggerated reminder that every live performance is unique.

The effect was funny, as was the choreography. The two dancers, accompanied by metronomic clinks and clinks, swayed like parts of a machine designed to do a pendulum, choppy dance like dental floss. This deadpan feat was periodically altered with the addition of props (bullets, duct tape) and Kang’s slapstick humiliation (ankle-falling pants). But this apparent randomness sometimes synchronized with the divergent video: a timing that would only be impressive (and funny), as here, live.

For mind-bending paradoxes, hard to beat quantum physics, the subject of the final selection, “Touchdown,” a solo by Taiwanese mathematician-turned-choreographer Hao Cheng. The projected text explained some of physicist Niels Bohr’s landmark discoveries about the fixed orbits of electrons, and then Cheng took the stage and collapsed.

The rest of the work suggested but never clearly explained a personal incentive for this collapse – something about how our paths in life might seem mapped out but are in fact uncertain.

Yet as Kang drew concentric circles on the floor with chalk and crumbled in a pastel version of action painting, he was expressing a great deal of frustration with the uncertainty. How can something be a wave and a particle? he asked. How can we find a gain in a loss?

Or, to extend the sentiment into our current situation, how long will this pandemic last?

We may not know, but we can pay attention to moments like the final image of “Touchdown” – floating lights representing the way electrons “glow as they fall”. And we can remember not to take visits from abroad for granted.