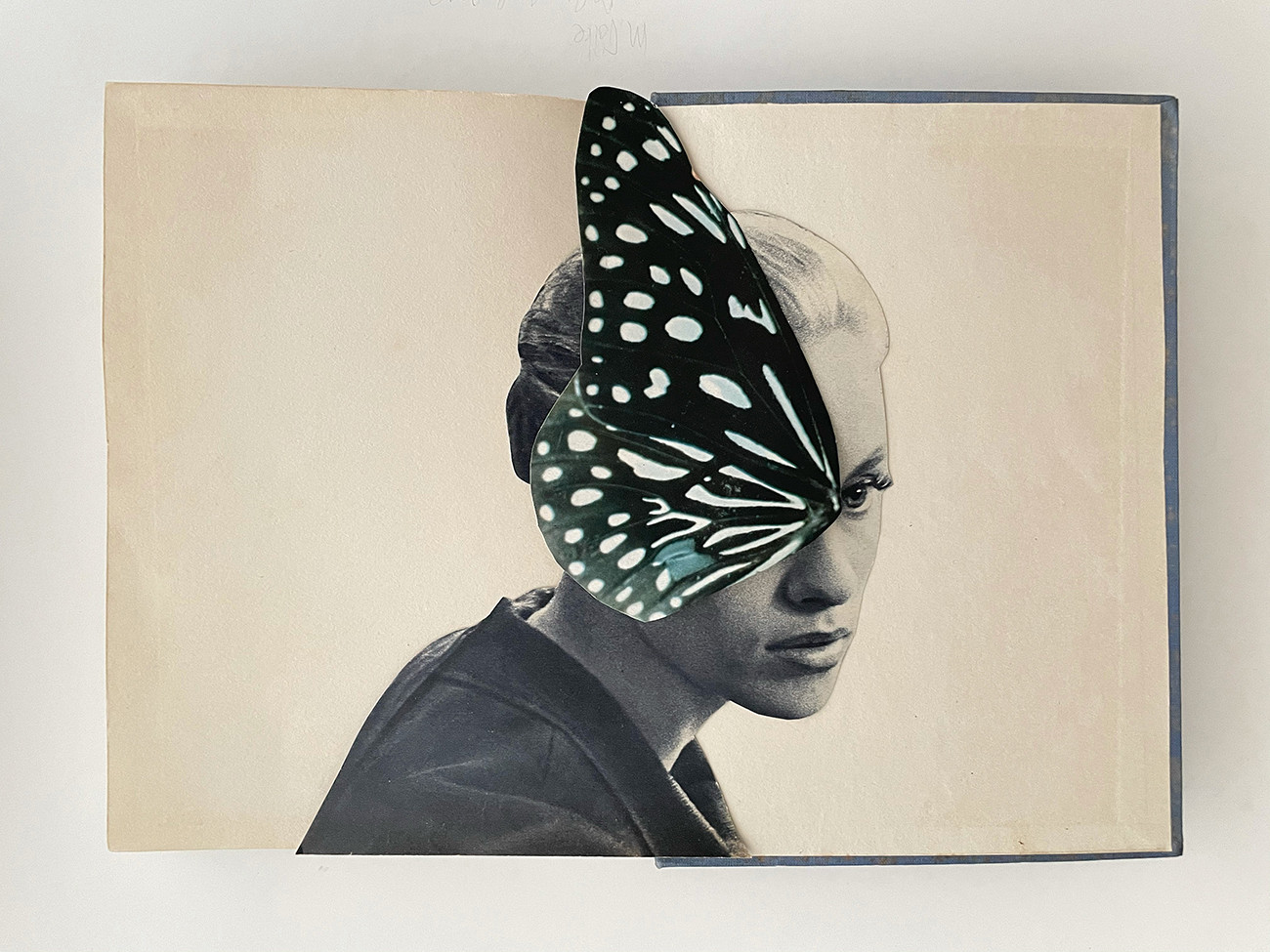 part of the circle

Miriam Tölke stacks everything in her studio, uncovers, takes individual sheets out of their bindings, rearranges and cuts the first prints into shapes. The faces are divided in two, the landscapes chosen – everything that is important to Miriam Tölke and reflects her own impressions. Between Berlin and the surrounding countryside, the city itself and nature are a constant impetus for her. The thrilling, compressed and uncanny of a big city, the anonymity and bustle into which one slips as a stroller and soaks up moments to store them for oneself are just as relevant to the artist as the peace and harmony of nature outside the turmoil.

Both are reflected in his work: his found faces seem to rest in themselves, as if floating, falling from the luxury magazines and fashion magazines of a chaotic world that is only a space away. . Reassembled with aspects of other faces and ideas, they bring the gaze back to the very center, like a pull to head out of the image towards the next landscape. Identity and balance, two guiding principles that play a major role for the artist.

As a mother of four, femininity is a natural theme for Miriam Tölke. But it’s not just the only one. At the same time, she feels her art as a reflection on states, community and society. Where is our place in the transience of the moment. How do we find our ways? The collage offers him the perfect frame.

Miriam Tolke was born in 1977 in Bielefeld. She finished her painting studies at the National Academy of Fine Arts in Stuttgart in 2000 and moved to Berlin. Already during her stay in Stuttgart, she began to collect discarded objects: magazines, notebooks, books, catalogs. Paper that was deemed useless by others, but to her of incredible value. A treasure hunt in the city, which she continued in Berlin.

She assembles images from magazines with found objects, scraps of paper or fragments from her accumulated image archive. In this analog process, she collects, explores and observes, placing her findings in a striking and minimalist way in a new context. Brilliant images combined with landscape images become bizarre and irritating portraits that seem to reflect an inner world. A spiritual landscape, reflecting both the poetic thought of the artist and today’s spirit. In Tölkes’ images there is always an element of stillness, of pause, which is unsettling at first, before unfolding its profound effect and finally eliciting a smile.

I take everything out of context, collect, rearrange, assemble spare parts, mix materials and techniques. I create my own order out of the chaos of abundance.
I am a stroller. That’s why I live mainly in the city. I like to study people, faces, gestures, movements. Nature gives me a horizon.
Be naive in everything you do. The pictures are there – listen.
Mirjam Tolke2019

How to decolonize a museum? Try an axe.