The first images of the set of Ms. MarvelCovers of have surfaced. Actress Iman Vellani has been spotted in her prototype costume and a potential connection to Spider-Man: Far From Home.

In the images below, Vellani can be seen in her Captain Marvel costume, which she will wear before getting her own costume. But that’s not all that was captured as a look at what appears to be an EDITH drone was also taken.

🚨 Iman Vellani on the set of the Disney+ #MsMarvel series during the reshoots. Scene description: Kamala Khan is possibly being chased by drones, which resemble those used by Mysterio. https://t.co/5g8ZPBHyxr 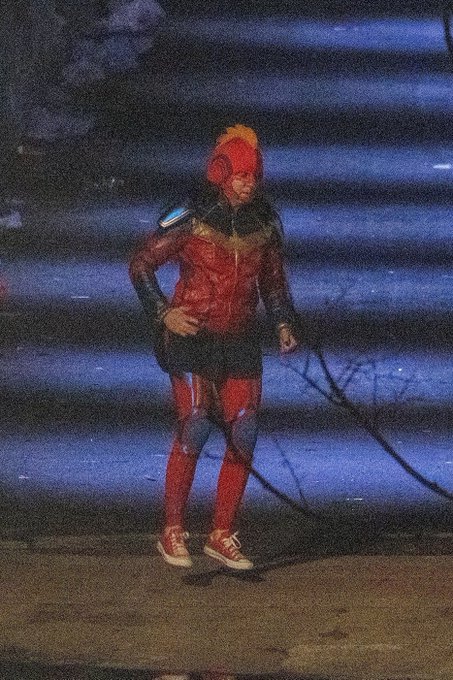 The drones were previously stopped for Spider-Man: Far From Home, so this begs the question of who controls the one in the image above. It’s possible the tech was stolen and is now being used by a new part in the MCU.

Created by G. Willow Wilson, Sana Amanat, Stephen Wacker, Adrian Alphona, and Jamie McKelvie, the character debuted in 2013. Captain Marvel #14. Khan, a Pakistani American from New Jersey, discovers powers that allow her to have the ability to stretch her body and change shape. She is also the first Muslim superhero to star in her own comic book series. In the comics, Khan is an Inhuman, a race of modified humans experimented on by the Kree.

Hailing from head writer Bisha K. Ali, the series will introduce Kamala Khan to the MCU. Ms. Marvel is one of many series Marvel Studios is developing for Disney+ to introduce new characters to the MCU, with other shows being She-Hulk and Moon Knight. After their Disney+ debut, the characters would enter films and appear alongside other heroes.

Are you excited to see Iman Vellani dress up as Kamala Khan in Ms. Marvel on Disney+? Who do you think controls the drones in the series? Let us know in the comments below!

Did you enjoy this article? If so, consider visiting our YouTube channel, where we discuss the latest and greatest pop culture news.