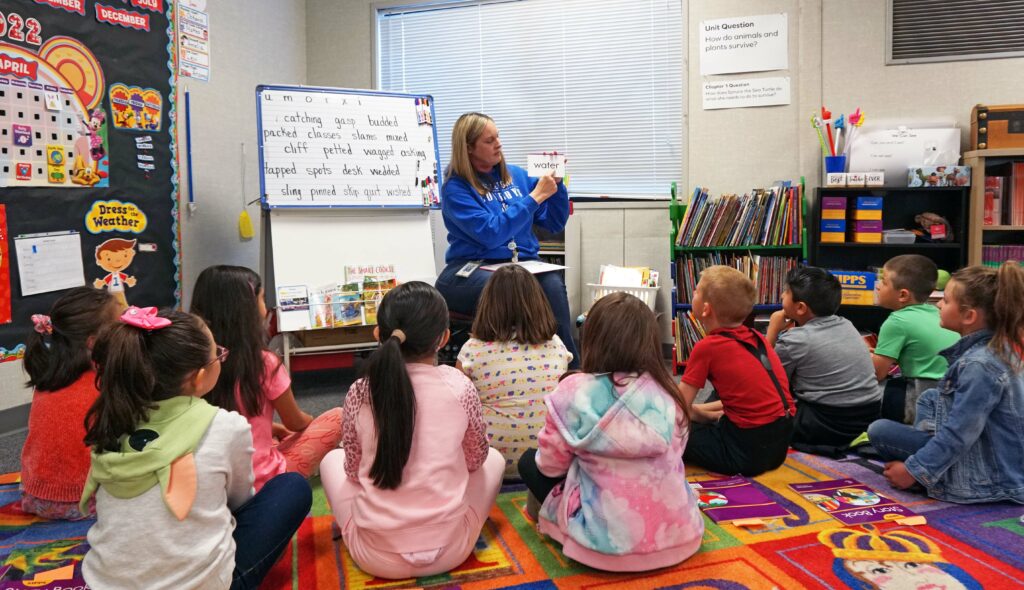 How a California district invested its Covid funds in literacy, improving student achievement — and morale

Melissa Ramirez, a first-grade teacher at Lockeford Elementary in Lodi, holds a flashcard as students say and spell the word “water.”

Melissa Ramirez, a first-grade teacher at Lockeford Elementary in Lodi, holds a flashcard as students say and spell the word “water.”

Alice Campbell is only 7 years old but already has strong opinions about books. His favorite is “Cat in the Hat”, closely followed by “One Fish Two Fish Red Fish Blue Fish” and “Fox in Socks”.

“I love to read and I’m very, very good at it,” she said during a recent break from her freshman class at Lockeford Elementary, amid vineyards, almond orchards and horse ranches northeast of Lodi in the Central Valley. “It’s great fun.”

Alice is not an outlier. Thanks to federal Covid relief funds, she and several of her classmates are now participating in a reading program first introduced in the district in 2014.

Many students are reading at grade level or beyond, even after a year of distance learning that has seen children across California fall behind academically.

Every day, Alice and her classmates learn new words, practice letter sounds, and navigate their way through simple books.

With $131 million in federal and state Covid relief funds, Lodi Unified has chosen to prioritize literacy and social-emotional learning in its plan to help students recover from the pandemic.

So far, the district has spent nearly $500,000 on teacher training and materials for a reading program called Systemic Instruction in Phenomenal Awareness, Phonics, and Sight Words, or SIPPS, which does not was initially used in only two of the district’s 32 elementary schools in Lodi, in the north of the country. Stockton and surrounding areas.

This is part two of EdSource’s look at how a California school district, Lodi Unified in the Central Valley, is using part of its $131 million in Covid relief funding to expand its literacy program. . We chose to focus on Lodi because its demographics closely mirror those of California in general and its challenges are typical of other districts of its size. The first part of the series, “How a California district is using its Covid relief money to help students,” focused on the district’s investment in social-emotional learning as students returned to school. school in person.

SIPPS was successful in improving literacy test scores in these two schools. At Leroy Nichols Elementary, the percentage of third graders who met or exceeded the state standard doubled from 2014, when SIPPS was introduced, through 2019.

At Borchardt Elementary, the percentage also jumped dramatically. In 2019, just before schools closed due to Covid, nearly 53% of third-grade students in the district met or exceeded the state standard for English language arts, 4 points above the average of State.

Covid funds allowed Lodi to expand the program to all elementary schools. It was an easy choice, said Susan Petersen, director of elementary education for the district. 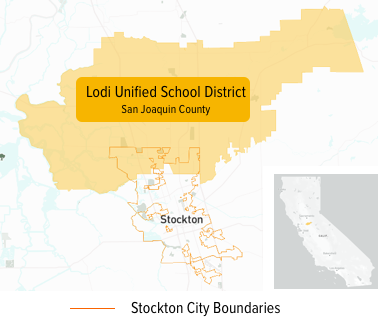 “In order to have a healthy and prosperous community, the number one priority of our schools is to send every child in the world to be able to read. If you can read, you can access everything else,” Petersen said. “It’s amazing what happened. Its positive impact has spread like wild flowers.

Lockeford Elementary, a K-eight school with 500 students, spent $40,000 in Covid funds on SIPPS books, flashcards and other materials, as well as teacher training. It is now used in all grades K-3 as well as after-school programs.

But the benefits go far beyond the academic, he said. The campus climate improved and students began to do well in other subjects as well.

“We’ve just seen a boost in confidence across the board,” Rogers said. “How do you know a student is successful? When they are happy. You can just see the stress slipping off their shoulders.

The pandemic has been difficult for many students in the close-knit community of Lockeford, where many come from low-income families who work on surrounding farms and ranches. Some students were left on their own to navigate remote learning while their parents worked, and others saw close relatives fall seriously ill from Covid. Everyone has had to deal with inconsistent and unreliable internet service.

Rogers was eager to invest in something that would bring joy to students and make them want to come to school every day. Created by the nonprofit Collaborative Classroom, SIPPS focuses on repetition and patterns, with students learning a few new words each day – either by memorizing the sight of the word or pronouncing it phonetically – that appear in stories simple and entertaining. read. The idea is that students know what to expect from repetition and gain confidence by mastering words at a level they can understand.

“It’s unified kids. I see them caring about each other, encouraging each other,” Rogers said. “It’s like they have a common goal. They succeed and they are rewarded, which makes them feel good about themselves. It’s great to see. … I feel like a rock star every day.

In Alice Campbell’s freshman class, teacher Melissa Ramirez divides the class into two groups based on their reading level for 30 minutes of SIPPS instruction each morning. One group sits at their desks reading quietly while listening to headphones, while the other group gathers around Ramirez as she introduces them to new words and sounds using flashcards and a board White.

One recent morning, she taught them words that have a soft “a” sound, like “water”, “speak”, “want”, and “father”. She showed them a word on a flash card, they recited it together, spelled it, then recited it again.

“I was suspicious at first because it’s a bit complicated; there are a lot of steps,” Ramirez said. “But it’s repetitive, so it stays the same, and the kids like it because they know what to expect. Now they’re asking, ‘When can we do SIPPS?’ »

As the year progressed, Ramirez noticed significant improvements in student behavior. They seem happier and calmer, she said, and the so-called “problem” students haven’t been a problem at all.

Ramirez cried when she described a girl who started the year without knowing her ABCs, but now reads stories on her own.

“When you can read, it opens up the whole world,” Ramirez said. “If you can read, there’s nothing you can’t do. It’s like having a solid foundation on a house – you need it before anything else.

Alice Campbell and her friend Scarlett Shates, 6, said reading was the best part of the school day. They love learning new things about the world and laughing with Dr. Seuss. They also appreciate that reading gets easier the more you do. Scarlett’s favorite book is “Green Eggs and Ham,” she said, because of the surprise ending.

“Last year we couldn’t read well,” Scarlett said. “But this year we are learning new words and sounds. … It’s like it’s good for your brain and all that.