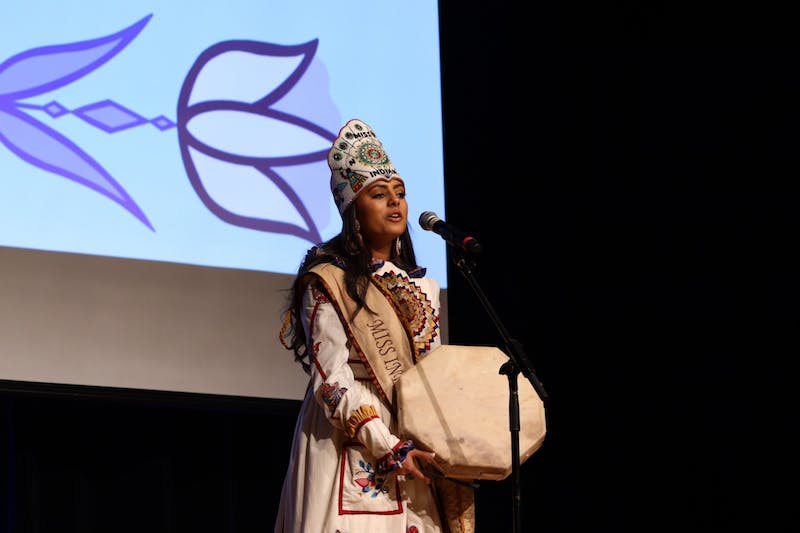 The CIC has been running these showcases since 2015, but has not been able to host in-person events for two years due to the pandemic.

This year, the event was hosted by CIC Culture Co-Chairs Evynn Richardson and Jalyn Oxendine.

Oxendine, a first year and a member of the Tuscarora and Lumbee tribes, described the content and importance of the showcase event.

“Whether it’s dance, storytelling, orals, there’s a lot going on in our culture,” she said. ourselves, and also for non-natives who want to come and educate themselves, or see some of the other things that we do in the culture.

The event began with an introduction and land recognition presented by Shannon Ross, Deputy Director of Scholarships and Programming, UNC alumnus and member of the Lumbee Tribe.

Last month, the University issued a proclamation recognizing the second Monday in October as Indigenous Peoples Day. Although the proclamation also recognizes that the UNC was built on the lands of the Occaneechi, Shakori, Eno and Sissipahaw peoples, official recognition has yet to be received.

After Thursday’s show, Richardson and Oxendine blessed the food and the performances began.

“This is the first showcase we have had since COVID,” said Richardson, who is a first year and a member of the Haliwa-Saponi Tribe and the Nansemond Nation. “And having not had one in the past two years, I’m just delighted that everyone is presenting what they’ve been working on and what’s important to them regarding their indigeneity.”

Richardson herself told stories at the event, sharing the story of the Haliwa-Saponi creation.

Other members of the UNC community performed a variety of dances, songs, speeches and poems.

Lydia-Ruth Mansfield, first year, member of the Lumbee tribe and CIC historian, and Zianne Richardson junior, member of the Haliwa-Saponi tribe and the Nansemond nation and vice-president of the CIC, performed a song and some oral pieces.

During their performances, they also announced that they would be relaunching the native song and lyrics group “Unheard Voices”.

The first guest to perform was Kaitlyn Deal, who was crowned Miss Indian North Carolina in 2020 and is a member of the Lumbee Tribe. Deal showcased his platform and sang a rendition of “Brown Skin” by former UNC student Charly Lowry.

Other guest performances included Jared Massey, a leader of the Apache Youth from White Mountain, who performed a hoop dance and explained its meaning.

Kaya Littleturtle, an artist and performer from Robeson County and a member of the Lumbee Tribe, has also conducted several performances. Littleturtle closed the showcase with a series of social dances for which he both sang and explained to attendees.

Solomon Lowry, a junior and member of the Lumbee Tribe, said the part of the performance that resonated with him the most was an oral piece. The poem is about Henry Berry Lowry, an indigenous figure resembling Robin Hood, he said.

“Loved it,” Lowry said. “I loved seeing my people up there. The only poem about Henry Berry Lowry was very strong for me because I’m related to him, so it was very powerful.

Each performance was presented in several languages ​​with detailed explanations for the participants. It was intentional, Oxendine explained, because the event was designed to be open to everyone.

“These things aren’t necessarily closed practices so anyone can come to them,” she said. “It’s just more so people can get to know us and see what we’re doing. People say all the time we’re still here. Even coming to these events makes people more educated than they were before. .

In interviews with The Daily Tar Heel, before and after the presentation, CIC members expressed that events like this do not make up for the University’s lack of recognition of Indigenous history and presence on the campus.

“I think the campus should do more to recognize Indigenous peoples on campus,” Oxendine said. “They have a lot of space to take the initiative and say, ‘We recognize that you are here and we want to make it a safe space for you. Because right now it’s not a safe space for us.

Likewise, Evynn Richardson has expressed frustration that the only safe spaces in existence are run by students or feel underfunded and neglected. She also said she felt American Indian Heritage Month had been virtually ignored by all non-natives.

“I’ve spent this whole month walking around and just like – we all celebrate our indigeneity, and you see everyone and they’re like, taking up space with us,” Richardson said. “Do they know how important this month is to us and how much we try to keep this culture, traditions and stories? “

To receive the news and headlines of the day in your inbox every morning, subscribe to our email newsletters.