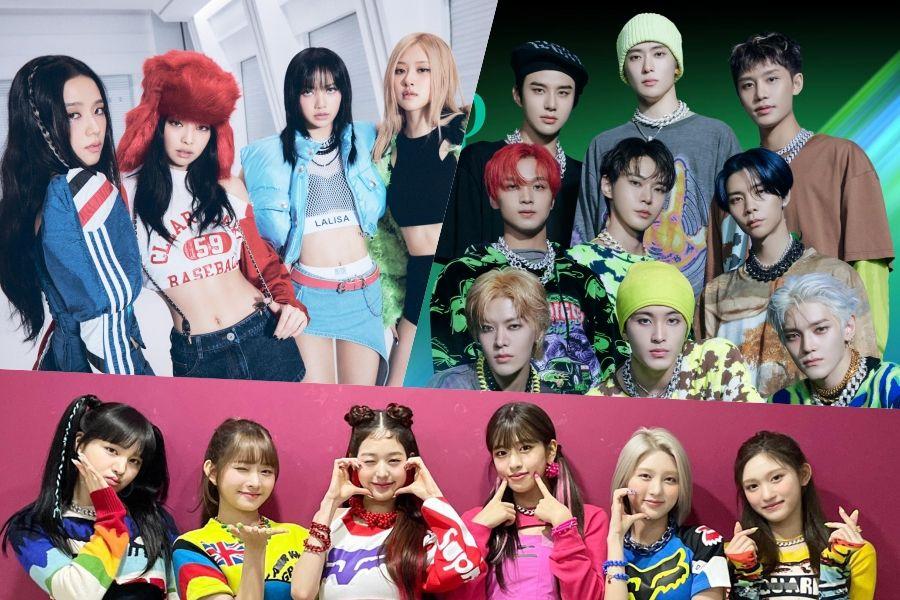 Circle Chart (formerly known as Gaon Chart) has released its chart rankings for the week of September 11-17!

BLACKPINK’s new studio album “BORN PINK” entered the physical album chart at No. 1, while the KiT version of the album also charted separately at No. 4.

IVE’s latest hit “After LIKE” soared to No. 3 of the week, and Lim Young Woong swept the next two spots on the chart with his songs “If We Ever Meet Again” and “Our Blues,” which are upgraded to No. 1. .4 and No. 5 respectively. 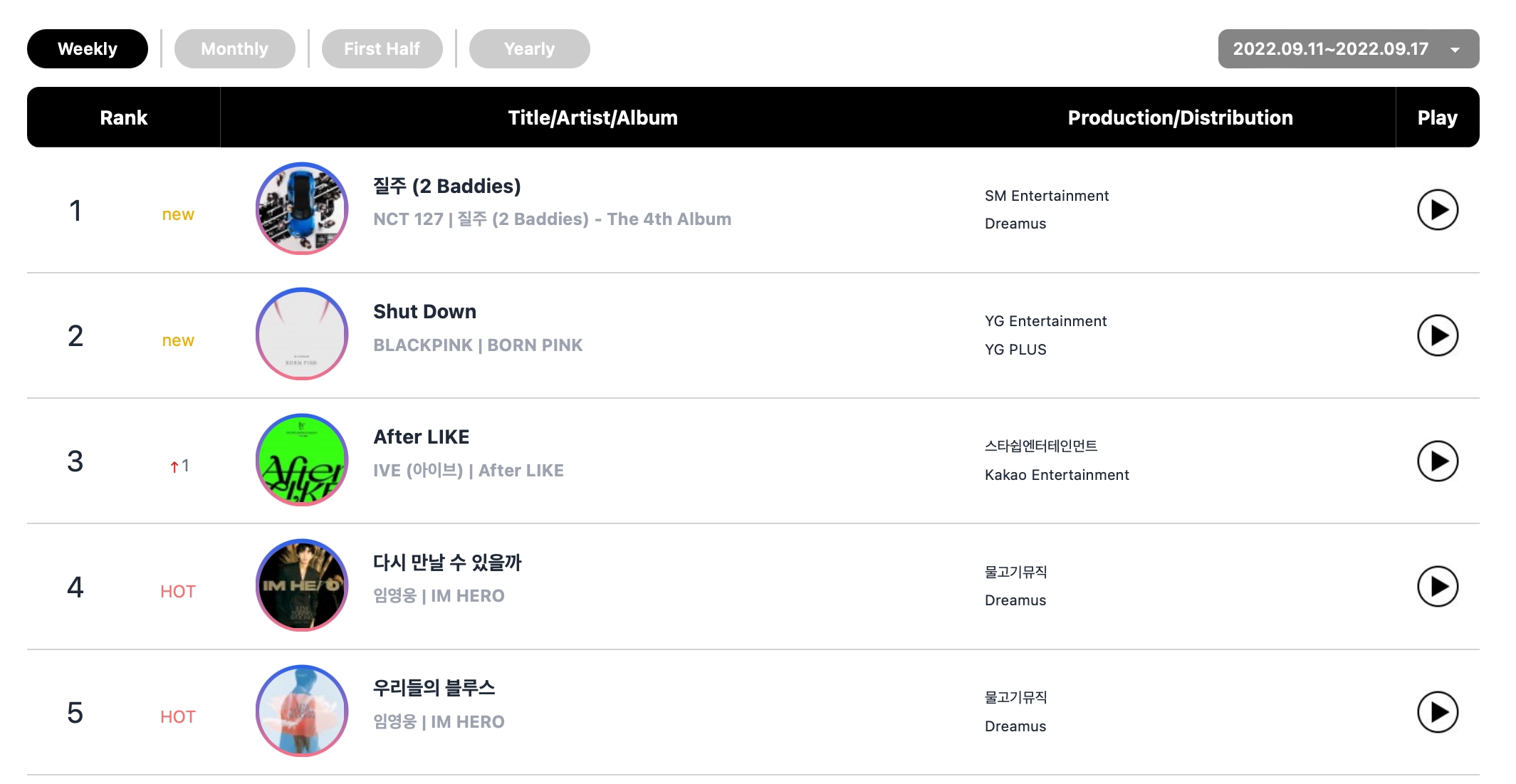 IVE maintained its double crown on this week’s Circle charts, topping both the overall digital chart and the streaming chart for the third week in a row with “After LIKE.”

The top four songs on this week’s overall digital chart remained exactly the same as last week: IVE’s “After LIKE” came in at No. 1, NewJeans’ “Attention” at No. 2, “Pink Venom” by BLACKPINK at #3, and NewJeans’ “Hype Boy” at #4. 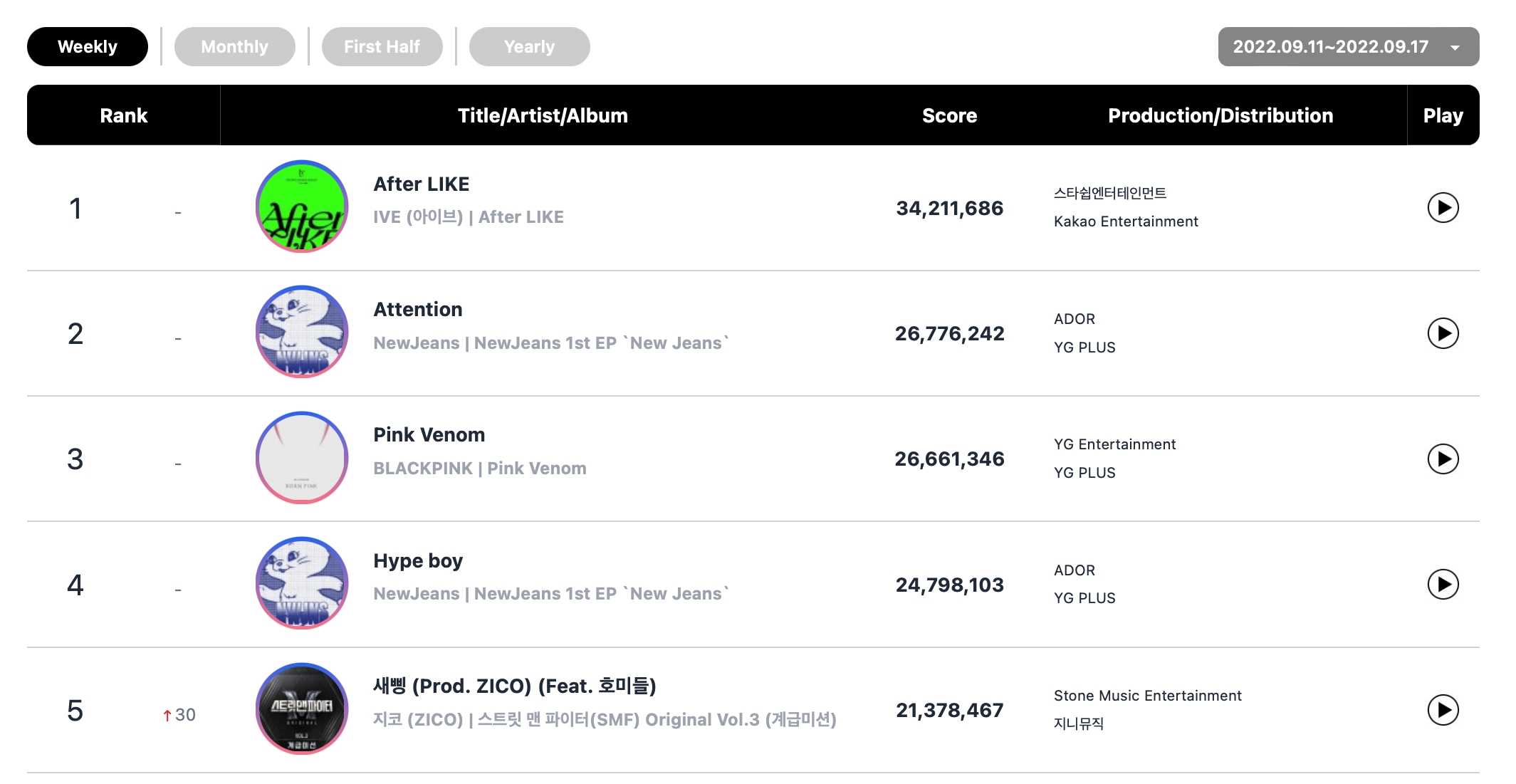 The top five songs on this week’s streaming chart were exactly the same as last week: IVE’s “After LIKE” continued its reign at No. 1, followed by NewJeans’ “Attention” at No. 2, BLACKPINK’s “Pink Venom” at #1. 3, NewJeans’ “Hype Boy” at No. 4, and Girls’ Generation’s “FOREVER 1” at No. 5. 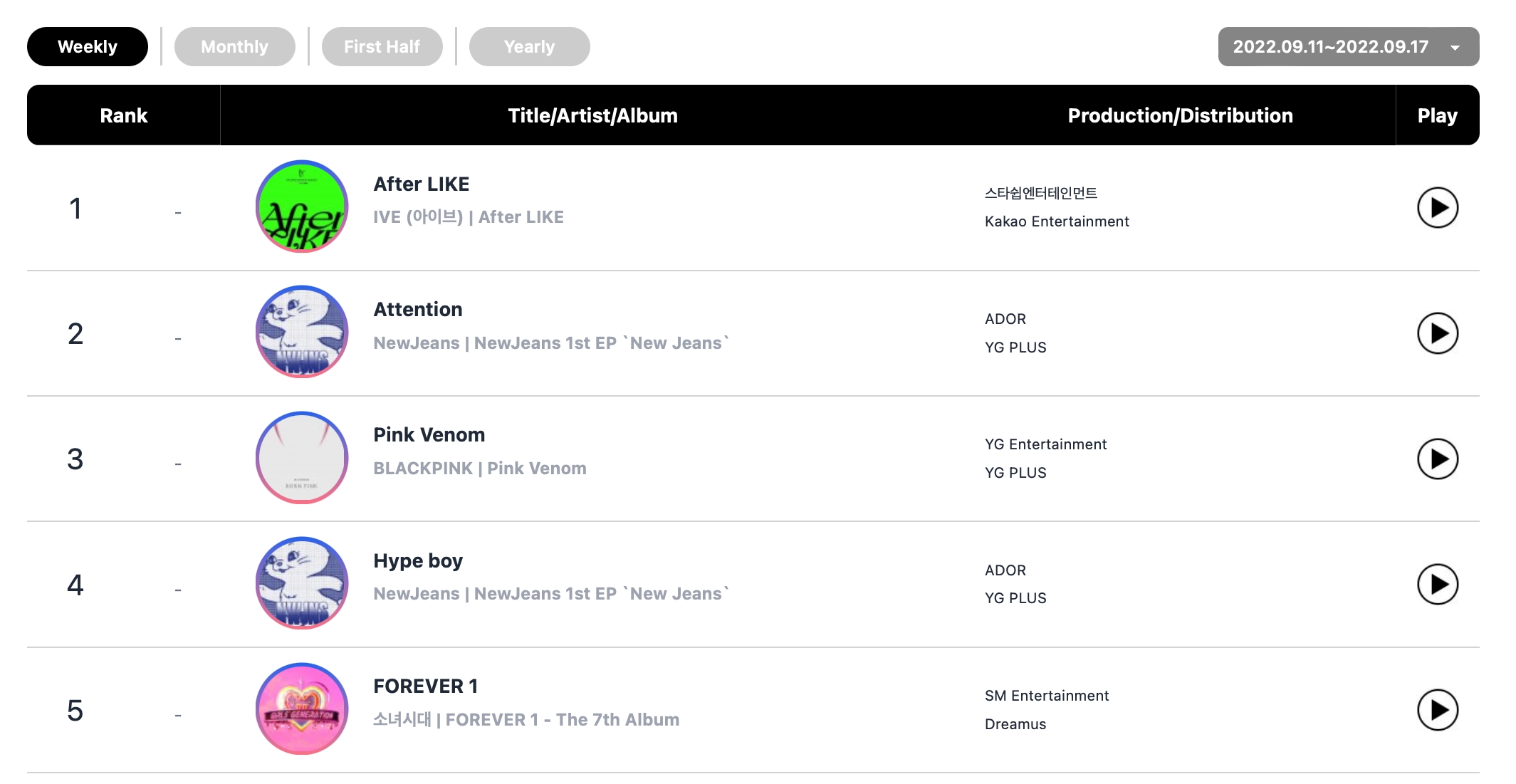 BLACKPINK continued to top Circle’s new Global K-Pop Chart (which is based on global streaming) with their pre-release single “Pink Venom”, while their new track “Shut Down” made its debut. debut at No. 3.

IVE’s “After LIKE” maintained its position at No. 2, while NewJeans’ “Hype Boy” also retained its spot at No. 4. 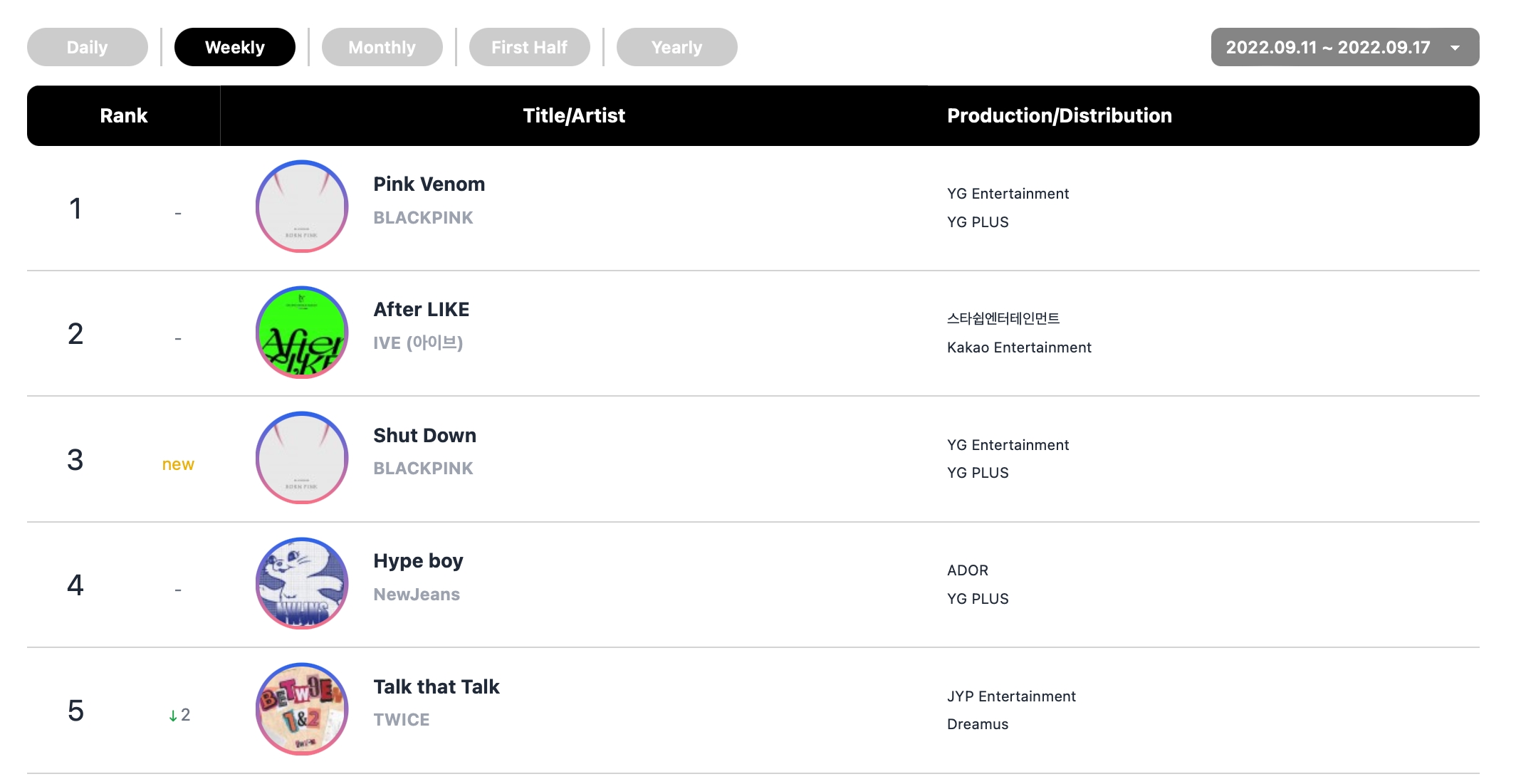 BLACKPINK retained its spot at No. 1 on the social chart this week, with BTS remaining strong at No. 2.

Lim Young Woong and NewJeans ranked No. 3 and No. 4 respectively, while TWICE came in at No. 5 for the week. 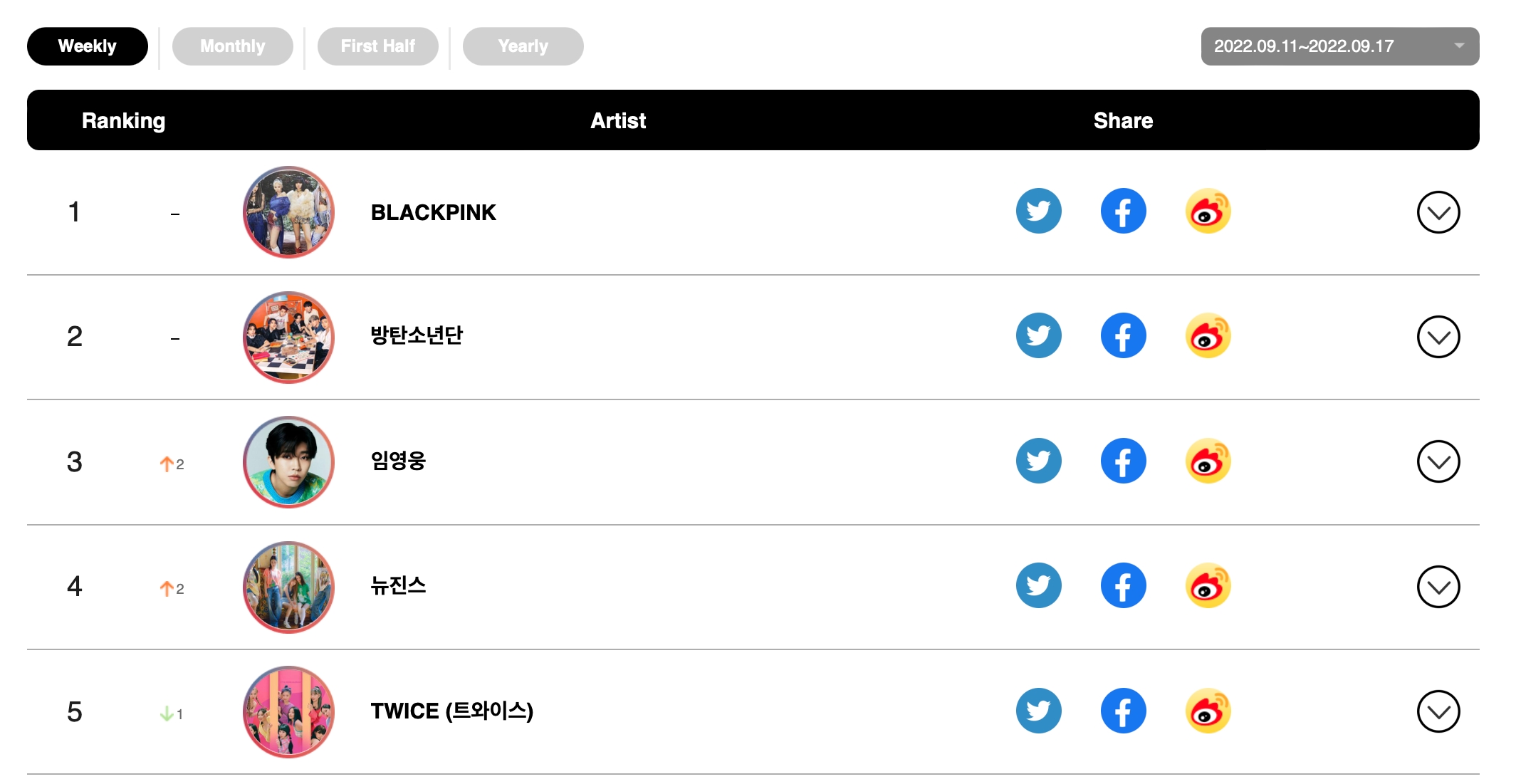 Congratulations to all the artists!

How does this article make you feel?