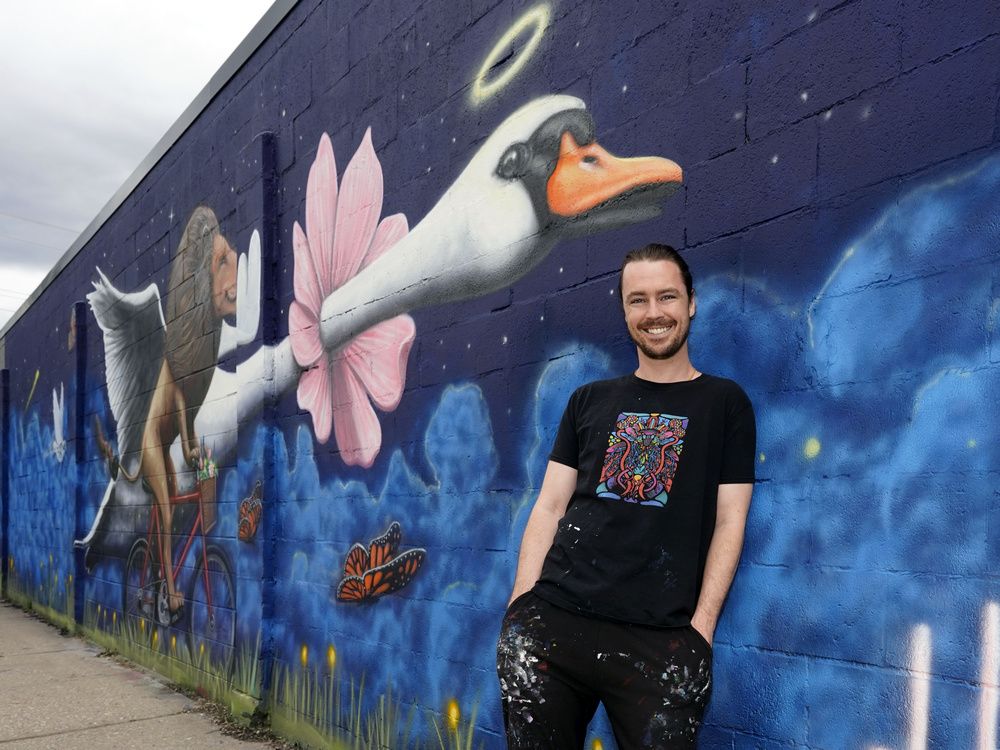 Allendale’s New Animal Mural Is Beautiful and Fun, But It Also Has a Deeper Meaning

Reviews and recommendations are unbiased and products are independently selected. Postmedia may earn an affiliate commission on purchases made through links on this page.

A stunning new mural has been erected in Allendale, full of deep circle of life symbolism.

Finishing last Saturday, Edmonton artist Josh Harnack spent two weeks painting the gray wall outside Connect Physiotherapy (6316 106 St.), transforming it into a fantastical twilight journey of a lion on a bicycle, guided by a giant goose with a necklace of pink flower petals.

Monarch butterflies are inside this eerie scene, as is a squirrel clinging to the lion’s tail. Follow them, why not? — is an X-ray dove.

“I wanted it to be fun and full of childlike wonder,” says Harnack. “But also a bit adult-oriented too.

“The surreal and the unknown of what is between this space.

“My idea with this one was that it was kind of like the space between life and death, a bit of limbo. I imagined this lion on his bike ride as his journey through limbo, life and death, with the kind of goose representing the shepherd or the boatman, that’s also why he has a halo too – a guardian angel, almost.

The artist included monarchs because they are one of his favorite creatures.

“But also because they have already gone through this life and death process as the caterpillars are reborn.”

He notes that the skeleton bird is a nod to the Grim Reaper, explaining, “Death follows us, doesn’t it? But also, the dove is a symbol of peace.

Symbols come naturally, from lived life. Harnack, 28, spent five years battling cancer when he was younger, which helped him access the sense of limbo in painting.

“In the heat of chemotherapy, I felt like half my body was dead, the other half alive,” he notes.

In and out of treatment after high school — it’s been clear for six years now — Harnack followed his love of acting and musical theatre, moving west, attending Vancouver Film School and getting an agent. His artistic career kind of slipped out of carpentry almost accidentally there.

“When I moved to Vancouver,” he says, “the cost of living was so high that I couldn’t really afford to go out all the time and do all these fun things with my classmates, so I found myself sitting at home in my apartment painting a lot.

During this time, he auditioned hard whenever he could. “I would be called up, and by the 11th hour I knew I had passed and got that game.

“But my agent would call me and say, ‘Hey, Josh. They decided to go with someone else they really liked because he had longer hair. Or brown eyes. Or something like that.”

“I found art to be the exact opposite, where it was all about work, and I started pursuing art full time.”

Harnack moved back home and studied Graphic Design and Visual Communication at NAIT, graduating in 2018. Since then, in addition to his smaller scale paintings, he has done 10 interior murals at various businesses around town. , including at Dealcloser in the Mercer Building and Bloom Hair Studio at 2920 Calgary Trail.

The untitled mural on Connect is Harnack’s fourth exterior wall, others at Emmy Deveaux (6924 104 St.) and RADO Alley in Old Strathcona.

He soon has more work in the residences of the Louvre and in Vegreville this summer.

The new lion and goose mural was made possible by Connect and the city’s Community Mural Grant program and, indeed, created an instant sense of community when Harnack painted it.

“People can see it from their front yard, so they walk around, bring their dogs and chat with me,” Harnack laughs. “Bus drivers were honking their horns as they passed and people were shouting from their car windows or from the bike lane.”

“The fact that someone can even paint something in such detail is just mind-boggling to me,” he says. “Rather than getting something to promote the business, we just asked him to paint something that people in the community and the nearby school would enjoy.”

The plan worked. “There were eight or nine people standing there one time and I was just painting and they found out they were all neighbors and had never spoken to each other before,” Harnack says. “So it was a very direct way of community engagement, where now these people are engaging with each other – pretty cool.”

Visit harnack.ca to see other works by the artist, and take the time to visit the new wall to gaze blithely at infinity with the help of a giant goose — it’s really worth it.

Sign up to receive daily headlines from the Edmonton Journal, a division of Postmedia Network Inc.

Thank you for your registration!

A welcome email is on its way. If you don’t see it, please check your spam folder.

The next issue of Edmonton Journal Headline News will soon be in your inbox.

We encountered a problem during your registration. Try Again